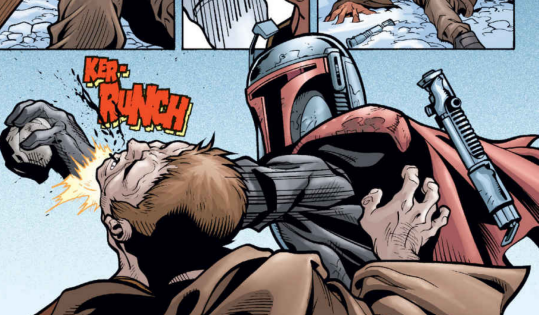 This version of Jango Fett features his appearance during the encounter with the Jedi in Open Seasons and prior to his capture by Count Dooku. All armor must be made of a solid material such as fiberglass, styrene, urethane rubber, sintra or Vac-formed ABS. Armor must have dimension and give the appearance of thickness and depth according to the visual references of this character. All armor and soft parts must be weathered where indicated in visual references to give the illusion of battle wear and damage.

**Addendum: The chest plate requirement is not meant to exclude female members from becoming this version of Jango Fett in open seasons. Female-style chest plates that conform to the general appearance/configuration of Fett-style plates are acceptable. The diamond and abdominal plates must be as close to Open Seasons style seen in the comics as possible.